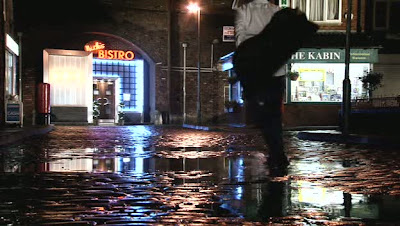 It wasn't billed as a "Big Week" but this week on Coronation Street was awesome! It was filled with emotional ups and downs, drama and comedy. It was probably the best full week of Corrie I can remember in ages. No explosions, no murders, no hostage situations, no Stella (or very little). 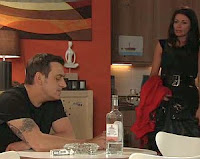 The main focus of the week was the Barlow storyline. There was booze, abduction, arguments, fear, and anger. There was the dragging up of history between Peter and Ken. We had Peter hurling accusations at Carla for tempting him away from Leanne and blaming her for all his problems. Her crush, his turned head.  He was horrible to her, through the booze and disappointment and anger. He then tried to lure Leanne back with a cufflinked shirt and a belly full of booze. He told Leanne he'd never taken her ring off. He didn't. I wondered why Carla never mentioned that.

He went on a bender and I think everyone's heart broke when Simon took one look at him and accused him of being drunk. He lurched around the cobbles, getting into public and private arguments. Nobody plays drunk as well as Chris Gascoyne. He disappeared and they all thought he might have killed himself. Because of a recent tragedy where a young man was found in the canal near Manchester, they edited out any visual and verbal reference to Peter being in the canal as the original story went but it still worked. And now Peter's disappeared with Simon, which was the root of all Peter's angst this week anyway.

Kirsty and Tyrone had another bust up when he was helping Fiz and she thought she might be going into labour. You can see her rage building and her jealousy fuelling it and even she doesn't understand why she's doing it. 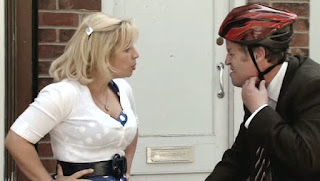 With the Windass group, we got a bit of Owen railing at Izzy about being pregnant and the discovery and finish of the bully story. That was a bit of a damp squib really. We've only seen it for a couple of weeks but it's been going on for months? Brian, who is supposed to be the head of the school, was kowtowing to the bully because her grandmother is the chair of the school governors. Did anyone find it ironic that he was bullied by Julie into doing the right thing?  The governor did the right thing as well. She made her granddaughter apologize and that had to be the snarkiest and least heartfelt one I've ever seen! Wasn't the little girl great!? But it's done and dusted now.  Game over. Happily ever after until the next crisis.

Carla's brother has appeared and there's old history, a connection with Michelle and family obligation. He got qualifications while in prison and now he's working at the factory and messing up, flirting with the girls and recovering the lost contract. Michelle told him about Carla's recent troubles with Frank. That isn't even the half of it when you think about what Tony put her through) Rob's a serious flirt, though it was nice to see Eva laugh and smile again. Half the factory girls were giving him the eye as well and he wasn't adverse to giving it back.

One brief scene that struck me:

Gail about Leanne "She let you down." Nick "No she didn't, it was the other way around!"

It's about frigging time I heard Nick admit that the breakdown of their marraige was his fault!!! Hey may have said it in more or less those words in the past but this seemed more direct even if it was an offhand remark. 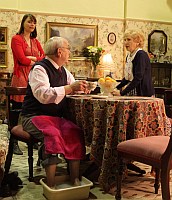 Tracy winding up Norris under long suffering Emily's roof. It constantly amazes me how much room these houses seem to have. All of the old side houses only have two bedrooms upstairs, and a small bathroom. Emily's downstairs has a more formal sitting room and the back room has the dining table. Norris has a bedroom. Where's Tracy staying?

Kirk and Marcus were good too, bonding over steak and kidney pie, trifle and bad beer. Kirk hasn't been on our screens in far too long. I think he needs a storyline of his own!


It's so nice to see Tyrone reconnect with old friends like Fiz and with Tina and Tommy. I like it when Corrie shows these easy friendships. They don't do it often enough. These particular ones are meant to fuel Kirsty's insecurities and jealousy. I wonder if they'll persue this if things fall apart with Kirsty and Tyrone?

I hate Mary these days. But the little storyline with Mary and Roy finding a common interest in chess is going to be good although I don't look forward to the inevitable crush Mary is quickly developing on Roy. Roy is not going to notice because he's oblivious to things like that but Hayley sure is and she's already not Mary's biggest fan.
Posted by Tvor at 13:03