The opening arguments really exaggerated Frank's personality and the incident. But you have to do that to make him look as guilty as possible. Calling him a sexual predator implies he makes a habit of raping women. Maybe he does but maybe he doesn't. He's certainly a vile ratbag for doing it even once, don't get me wrong.  He's no Mr. Niceguy. 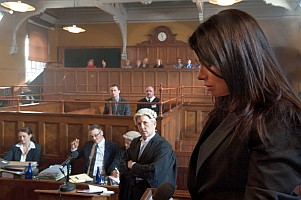 Carla's testimony was riveting, wasn't it? She was really believable and it looked like Frank even had a moment or two of guilt flash across his face.  His face started off cold and stiff, impatient, dark eyes snapping.  The more emotional she got, and when she described the actual rape, you could see a subtle change on his face. It softened, he swallowed hard, he looked away...it showed a definite look of regret. You could sense he still loves her and maybe, down deep, he realizes what he's done was wrong when he heard how scared she was of him. He may not accept it, and he justified it by his utterly positive belief that she was in love with Peter and carrying on with him all the time.

The prosecutor really raked Carla and her reputation over the coals. She practically called Carla a prostitute for allowing Frank to invest in the business, knowing he fancied her. The more the prosecuting attorney lambasted her, especially about Peter, the more Frank seemed to shore himself up and recover his resolve. Forget sentimentality, he's back baying for her blood.

It made me very angry that the prosecutor used Maria's attractive dress and the fact that she was drinking, to imply she should have expected his reaction. All of that does not justify anything, anyone's history, background or what they were wearing, none of that should enter into it ... but that's what happens a lot in these kinds of trials so in that respect, I found this realistic though it made it difficult to watch.

Unfortunately, Peter having to admit he now is having an affair brings doubt on Carla's testimony even if they insist nothing was going on then. When Anne passed Leanne the photographic evidence in a very measured and planned way and she hollered out in court, that sealed the deal.  There's always at least one obligatory outburst in a soap trial and if it isn't  during the testimony with someone outraged at a lie or some other such injustice or shock,  then it's someone screaming that the verdict is unfair! And even though that outburst  technically could be construed as wrongly influencing the jury because it wasn't evidence actually presented in court. I think they could even be charged with perverting the course of justice if it could be proven Frank and his mother were in cahoots over it. We know they were but proving it is their word against the law's.

Peter admitted the affair under oath. You can tell the jury all you want to disregard it but you can't unhear something. 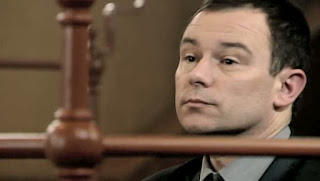 Once the affair came out in court, I knew he'd get off. It put reasonable doubt on Carla's testimony. Frank was found not guilty and walked free.

Now Peter and Leanne have to deal with the fallout. Leanne is willing to get past the affair because she knows he did the same for her and Nick's affair but Peter's determined to be with Carla. I guess he can keep that promise even if he's rubbish at keeping them long term. There's Simon to be considered and if Peter thinks he and Carla and Simon can be one big happy family, he's got another think coming.

This was a bit more realistic than most soap trials tend to be though still some gaping holes. Some great performances, especially by Alison King and Andrew Lancel. The expressions that crossed his face were impressive. From cold to guilt and regret, to smugly satisfied.  Chris Gascoyne and Jane Danson as runners up in the performance accolades as does Gwen Taylor as Frank's bitchy mother. By God/dess,  doesn't she put Gail and even Mammy Connor to shame! Carla's had a lucky escape in the mother-in-law stakes there!

Where do we go from here? I hope we don't see Carla cowering every time she sees Frank. I'm sure they'll start setting up suspects for the forthcoming murder plotline and we can start adding up the clues from this day onward.
Posted by Tvor at 20:36