Carla's back and Nick didn't want her involved. Surely there's some legal issues there and then they were stealing each other's business. Sean was the first one to back Carla but then he's also got another job. You just knew Carla would come out on top! Nick is so sleazy and he's sucking up to the workers and he's sucking up to Leanne and Natasha is trying very hard to get her hooks into him deeper and deeper. She even rumbled Leanne's past to Nick but you know, wouldn't Gail have already gossiped that little fact to Nick years ago? Or Audrey. And how DARE he ask her what it would have been like if they'd stayed together and had a baby when he was the one that insisted she terminate their child!!!

Sean is so anxious to connect with Violet and his little boy, Dylan, and made up a pretend Facebook page (yes i know, it's Facescene and the colour scheme is green instead of blue but you know what it really is!) as Liz McDonald. That should have been the first suspicious clue to Vi! As if Liz would! Sean said he didn't know if any of Violet's mates were on the site but he and Violet go back a long way, surely he'd know if her mates were on Facebook or could at least look them up and then see if Violet was on their contact lists. Of course Sean is going to get caught out, and soon!

Tina and Graeme are all loved up. A lot of people, including me, think that the character of Tina has been ruined. I really don't think this pairing is going to last. Between David's interference and the fact that i'm sure Graeme was a rebound thing for Tina, latching on to him after her dad died. Well, Tina is lodging with Rita and Emily's house seems to have grown another room as well, the same one Ramsay stayed in but those houses on that side of the street only have two bedrooms upstairs and the third that used to be the "box" room, everyone had turned into bathrooms. Number 7 has the loft conversion but let's face it, most of those houses always did have elastic walls, especially the Rovers! After their initial coming together, they've disappeared. Just as well. I really don't like the way Tina seems to go out of her way to rub David's face in it.

Lloyd has got himself involved in a very messy domestic scene. It gives me chills seeing a woman in a situation like that, and accepting it and excusing it. I think it's being portrayed very realistically, actually. This happens. And Craig Charles is a very underrated actor, he's doing a really good job with this. It'll all end badly, but i think it's a good storyline and one that needs telling.

And Lewis is still around... out of the escort business but he just can't seem to help himself flirting and it's with Deirdre this time. Do you not think this has given Deirdre quite a lift as a character? She's flirty and fun and thoroughly enjoying herself. We know she loves Ken but he's never been very exciting and Lewis is there for the asking if you can make the payment. Or he was. Will he be able to break the habit? Audrey's nemesis, Claudia let all the cats out of the bag and very publically! Lewis talks about retiring to Greece...and running a hotel. That's not much of a retirement but it's probably all talk until Audrey starts to think it's a good idea. She'll just sell up and high tail it away to paradise. Suddenly Lewis looks a bit green around the gills.

But now that Gail knows his past, we get to see her disapproving face hovering in the corner all over the place. It's too funny! But i do wonder, why does Lewis need to defraud the bookies? Surely he made a good bit of money being a gigalo? He's *supposedly* got a job in a casino now. What has he spent all that cash on?

Then of course, there's Natasha continuing on her quest to trap Nick into a life of domesticity. She's determined to buy the salon and Maria comes back and slips in with first refusal, right under her nose. Natasha is jealous of Leanne and now finds out her rival in the Salon Wars is a Nick-ex too. I'm actually glad to see Maria. I wonder what they have in store for her? 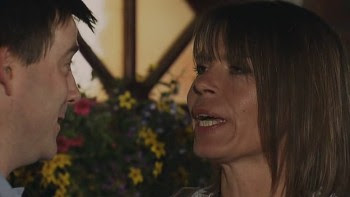 Stape's lies are now back to haunt him big time. I'm really loving that Chesney found out and really, really loving that he keeps digging the sarcastic knife in. I could rant on and on about how much i hate Stape and all his selfish lies and manipulations but you're all probably pretty bored of that by now. Gotta say though, as much as i hate the character and what he's done to Fiz, the whole storyline with Colin returning and that nutter Charlotte getting *her* claws into Stape further and further is a good laugh. She makes the whole storyline! There's a big hole in this storyline though. How on earth would the husband of the woman that the real Colin was shagging know that John is Colin and how would he know where "Colin" lives to come around shouting the odds and thumping him? Poor Fiz is going to have no nerves left at this rate.

Mary is being a wedding Nazi, she's really being forceful and aggressive and obviously living her fantasies out in Hayley's life. Hayley needs to stand up to her. That might be tricky. But in the meantime, fun to watch Mary steam ahead, get her face in a knot when Hayley stands up to her and see what she does when that eventually happens?

Sunita is not juggling job and children and house well. What did she do when she had a house three times the size? And why would she want to do it all? She didn't worry about having a job when she was single. It makes no sense. Typical misongynistic Dev, wants the little woman at home raising the kiddies. Is it too much for her to ask for a little help from him now they're supposed to be raising the children together?

Sian and Sophie are an item but Sophie is jealous of Sian's friendship with her former boyfriend, Ryan. It seems pretty clear to me that, for Sian, this really is just an experiment, confusion for her, but it isn't for Sophie. It'll all end in tears! Nice to see Sally back though. Molly is pushing Tyrone to sell Kevin his share and move away before that baby shows it's little face. She's obviously afraid it's going to be Kevin's. I'd love for it to be Tyrone's. So it looks like Eileen might buy their house. We'll see.

Such was the State of the Street in July!
Posted by Tvor at 20:50