One idiot after another 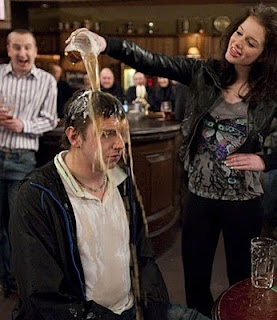 I'm at a loss, I really am. This week on Corrie, it's been idiot after prize idiot. Some were fairly harmless and some were almost fatally dangerous. Watching this week was an exercise in frustration for me. I'm not even sure where to start, there are so many in all directions!

There was Graeme chasing after Rosie and Natasha, using the same lines on each of them. Did he think they wouldn't find out? They might not have been mates before now but they do occupy near distances on the same street. He got a beer shampoo for free for it. I guess that means he won't be dating either one any time soon. It *was* funny though.

That brings me to Natasha. Desperation isn't pretty, honey. Salivating over Nick, babbling in the street, throwing yourself at him... it might all get you a date or a shag but it's not going to get you any respect or a relationship. Especially not with Nick Tilsley who is also an idiot. So much of one that his mother has been in prison for weeks and he's *still* not actually gone to see her.

Rosie is an idiot too but that's just par for the course. Believing that her new fella is a footballer? WAGs actually do go to a match now and then to admire the prowess of their beloved on the field. The fact that he's been putting her off from attending would be a red flag for most women but obviously not for Rosie who probably hates football anyway. I'd say it turned out he couldn't cut the mustard but in this case, that's exactly what he can do. And the ketchup and the brown sauce! :)

Let's look around and see who's next.

Audrey's an idiot for falling for the charms of a slimy escort who's blatantly ripping her off (making her pay for theatre tickets he gets for free) and who has come between her and her oldest friend, Rita, and because she's making a fool of herself falling for his charms.

Kirk, of course, is a bit of an idiot on a good day but posting a photo of Jason instead of himself was bound to get him an ear bashing from Izzy who now seems to fancy Gary.

Let's move up the idiot scale a few steps to Kevin Webster. Tyrone posted the baby scan on the internet and then told everyone when he wasn't supposed to but Molly should know better than to even suggest he keep the pregnancy to himself when she's popped out like a balloon and he's so excited. Enter Kevin who could be the baby daddy. He's all choked up but then has the utter temerity to suggest she abort the baby. Where does he get off? At 20 weeks into a pregnancy, I doubt there's a clinic that would do it.  He was out of order suggesting it just because he is having a hard time living with the possibility that it's his kid and it would be evidence of his infidelity.

Kevin would lose everything, his family, his friends, his reputation. He's betrayed his best friend and business partner.  He tried to force her to get rid of the baby. I don't think he could show his face in Weatherfield again if all that came out and I wouldn't feel the least bit sympathetic for him. I'm not any happier with Molly rubbing her bump in his face daily either. It's an all around bad situation which is bound to come out sooner or later because in soaps, it always does. Kevin should have had his ass kicked last year when he got that middle aged crush on her in the first place.

Prize idiot of the week, though, as you might expect, is John "Stapid" Stape. Stapid is a term a fellow blogger coined this week and it fits, oh it fits! Stupid + Vapid +Stape and you've got that in a handbag. Another fellow blogger has diagnosed him as a classic Aggressive Narcissistic and I fully agree with that too. Sociopath also comes to mind. Clear sense of right and wrong but not when it comes to himself. What could go wrong? How about your new boss visiting to return your mobile and you sharing 2 bottles of wine with him. He's clearly drunk and you usher him out the door and let him drive home. Idiot! And I think you can be prosecuted just for that these days. I know bar and pub owners have been.

Then there is the whole identity theft issue which is obviously not as well thought out as Stapid thinks. There are more holes in his scheme than swiss cheese. Did his new boss even match the signatures between the forms he signed and the driver's license? Did John spend hours practicing his forgery skills when we weren't looking? And from the look of it, the real Colin must be at least 15 years older than Stape. Did they not check his birth date and his CV dates against his face? Come to that, where did John get hold of Colin's CV? He only had his certificates and ID, did he make it all up from stuff Colin had told him in the past? Surely he wouldn't know all the hire/leave dates exactly and the new school should be checking that, shouldn't they? If the real Colin hasn't stepped on a plane to emmigrate yet, won't he miss his driving license? Emmigrating doesn't happen overnight and there's a lot of checks and balances. Surely the tax people would wonder why he's getting a paycheque from a school while he's trying to leave the country? 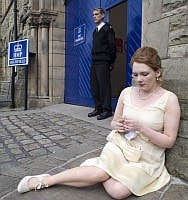 On top of all those plot holes, he's coercing Fiz into the plot. Fiz, dear, you already know he's a good liar and now he's at it again. Doesn't this tell you something? It tells me you're an idiot, too. I really, really hope when he gets caught, and he will, that he goes down for it. I really, really can't stand the character and how he's totally ruined Fiz. If he goes down, I want Fiz to get really, really angry, not spend weeks and months moaning and whinging and whining and feeling sorry for herself. I don't want him trying and trying to get her back because he's not really a bad man, is he? He just had a bit of bad luck. And if she won't take him back, he'll just get all depressed, get himself beaten up in prison and pretend to be suicidal and give away another load of money to a bimbo. Sheesh!

well plenty john-someone an ex colleague even turning up at your new school looking for a job themselves? someone actually knowing colin at the school by chance?

John seems to have made one bad decision after another pretty much since he's started. The affair with Rosie, kidnapping her, now this.