Graeme Proctor, an old soul in a young body

When Graeme Proctor first appeared on our screens, he was a cell mate of David Platt's in the juvenile detention centre. He was clearly a pyromaniac and most definitely way off the wall. He provided a quirky, nonsensical mirror to poor David's angst. Lucky for us, he must have struck a chord with the viewers and the producer because his character was returned to the canvas of Coronation Street.

We know Graeme is not a sweet and innocent boy, but he does have that childlike quality. He comes across as naive but does have "street smarts" and often it seems like he "didn't get the joke". Then you see a twinkle in his eye and a sly near-wink and you know he's actually taking the piss. Nobody can tell me his dressing up as a near-replica of Liz for Teresa's Slapper and Vicar party wasn't a mistaken understanding of the concept of the party. He knew that was Teresa's intent, for people to imitate Liz, but I think he didn't realize that Liz wasn't in on the joke.

He seems a bit thick, yet he has a keen sense of observation for what's going on around him. He's pragmatic, earnest, optimistic and kind. He's basically honest and working on turning his life around yet isn't adverse to a bit of dodgey dealing now and then. I like to think of him as the Greek Chorus, always watching human nature around him and he's often spot on in his observations. Most people in his world think he's weird but he is only eccentric. He is helpful to his neighbours and willing to lend a hand or a shoulder. 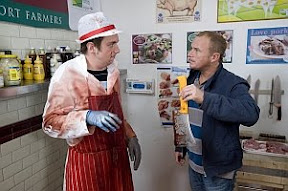 Recently, there was a scene where he and Kirk had been out together. I thought, wait, isn't Kirk a good 10 years older than Graeme? Graeme can only be David's age (David just turned 19 at Christmas past) since he was in juvvy with David who was under 18 at the time. Kirk never hangs out with David, after all. He's more of an age with Jason and Tyrone, his usual buddies. Kirk is older than Maria who is about 26 or 27 by now. (She was about 17 when she first appeared in 2000.) Mind you, Kirk is probably only about 15 emotionally, most of the time, though can surprise you sometimes in his maturity.

But that had me thinking. Given Graeme's nature, it feels like he really is an old soul in a young body. He certainly is wise beyond his years. We don't know a lot about his past but a few remarks have led me to guess that his childhood family life was probably not all that pleasant. It led him to a habit of setting fires and he still swoons when he gets a whiff of charred wood. He's determined to stay on the straight and narrow, however.

Craig Gazey plays Graeme Proctor which skill and finesse. I'm sure he must have a lot of fun with it and he has superb comic timing. He keeps Graeme reined in just enough so he's eccentric and yes, sometimes, weird but not over the top psycho. He gives Graeme self confidence with a dose of yearning to be accepted. He's already winning awards and I foresee many more in his future. He's a perfect, classic Coronation Street character and I really hope he's around for a long time.

You can read a great interview with Craig over here.
Posted by Tvor at 07:52