By George, I think he's got it 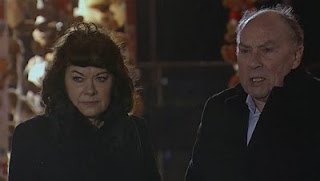 Little Simon's missing in Blackpool and Peter's frantic. George is feeling pretty guilty and so he should be. He reckoned Peter wasn't fit enough to look after a 6 year old and here that very same 6 year old slipped away while he was rowing with his wife about not letting Simon go back to his dad. Simon's not stupid, he knew George's lies were just that.

We've already seen Peter nearly drink again, with all the upheaval over George taking Simon but Leanne made him see that he can't backslide if he ever wants to have Simon back. Thankfully, he agreed and this scare of nearly losing Simon again might be the trick that keeps him off the booze this time. 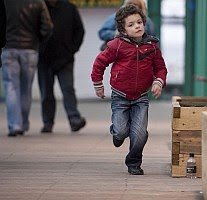 So now, every parent's nightmare. Simon is alone in Blackpool and the search is on. Deirdre voiced a very scary concern that someone could have snatched Simon. It could have happened because it does happen all the time. Going by the spoilers that all had headlines about Simon missing and possibly kidnapped, if I hadn't seen Eve and George, I'd almost have bet money that Eve had taken Simon in order to give him back to Peter, but it doesn't look like that's what happened. Simon, of course, will be found because this is a soap.

George is trying to get full custody of Simon and there's to be a court hearing. Will his quest succeed? Of course not! As I said, this is a soap and the viewers wouldn't stand for nasty George taking little Simon away from his daddy. I wondered how George could have got a temporary order through the courts without Peter being involved at all or without Social Services being involved. It might have been legal, even if a hugely speeded up process. Admittedly, stretching it a bit, George was right to be concerned when Peter started drinking again, and when he checked out of rehab early, but George has been plotting this all along to make up for being estranged from Lucy all those years.

Next week's spoilers say nothing about a court hearing so I'm guessing that George backs down. I would imagine his wife tore a strip off him for it as well and if he wants to save his marraige, that's another incentive. I know if I was Eve, I'd have not only taken a strip off George but torn him a new one as well. All that conniving behind her back and deciding they would have permanent custody of an active 6 year old without consulting her at all? Them's fightin' words/actions, them is!

Great location shoot, I always like it when Coronation Street goes on the road like that. Blackpool, of course, is a favourite and we've seen storylines there many times over the 50 years.
Posted by Tvor at 17:15