State of the Street - January

Kevin might be staying with Sally now that he knows where his priorities lie, but Molly got fed up with Tyrone and left him after she found out he wasn't going to take a job and move away. Only Tyrone figured she must be having an affair and jumped to the wrong conclusion and thought it was Dev. How on earth he would think that, I don't know but after all, this *is* Tyrone, not the sharpest tool in the box. Didn't you feel sorry for him though? He loves the bones of Molly but his loyalty to Kevin kept him from taking that job offer once he found out that Sally was ill. Really, though, Molly probably made the right choice. There's no point staying in a marraige when she couldn't have been happy or she wouldn't have had an affair only 6 months into it.

And Sally's prognosis is good and she's only got to have radio therapy. I guess it would have been too long and drawn out of they'd had to show her go through Chemotherapy. I gotta say I am as impressed as I knew I would be about how Corrie has been handling this storyline. They've really shown how it affects everyone around the person who's got cancer. Sally was one of the lucky ones. And it also seemed to take Rosie down a peg too, and she backed out of a boob job that would have been far superfluous to requirements anyway.

I felt so sorry for Tyrone. Does Molly really not love him? She thinks so. She's desperate to get Kevin back but he has seen the light and realized he really does want his wife and family. She begs, she manipulates, but he still rejects her and she might start to realize that Kevin probably was just using her, a crush, an infatuation. But it did my heart good to see that Kevin was forced to support Tyrone, listen to him cry on his shoulder, even return his wife's wedding ring and that is karma coming round to bite him on the arse well and proper. And I relish every uncomfortable moment he's going through after what he did to his best friend and business partner. Pam and Bill both know and now they know each other knows. If Molly and Tyrone are going to get back together eventually, they'll be the ones that engineer it.

More Grandad wars... Ken went off the deep end when he found out that George wanted to pay for private education for Simon. Ken figures it's bad for Simon, who won't have a happy life if he's brought up in a posh school. Deirdre was just more concerned about the smart uniform. Peter was very forthright at the planning meeting which George probably already had sewn up anyway, much to Ken's chagrin. I loved Deirdre's rant at Ken after the hearing. She knows darn well it's got more to do with the rivalry between Ken and George and he should have been supporting Peter rather than pushing him right at George. Maybe Ken's give up the battle because as much as he disapproves of the bar and the private school, he seems to be backing down a bit.

Then there's Gail and Joe, the newly minted McIntyres. El Desperado is in debt up to his eyeballs and illegally so. Surely he could go to the police once he'd paid off the loan shark who keeps coming back and threatening his family? He's scammed money out of Ted. He tried to get money out of Peter and an advance out of Bill. He gleefully accepted Gail's decision to sell the house (and yes, David, she *can* just sell the house you grew up in. Except, he hasn't really grown up has he? Most lads his age would be pleased to be able to move out on their own.) He even eyed up the charity collection jar in the pub! I really thought she was finally standing up to him when she told him she wasn't going to sell the house and Joe gave her insult after insult. I always knew he had a temper and and this just proved it. But no. One apology and one sob story and she took him back. No wonder she's a jinx with men, she has Doormat stamped on her arse! Next up, a life insurance scam by forging Gail's name on a crumpled up form. And obviously making one payment and then pretending to drown immediately after will not make the life insurance company suspicious. Or not. 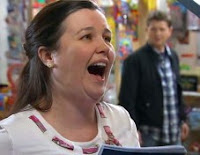 Yay! Mary's back to be a carbuncle on Norris's backside. She seems a bit more obsessed than she was before she left. I feel a bunny boiler coming on, don't you? It's nice to see Mary back anyway. And it's nice to see Sunita back and with the fiance out of the picture, can a reunion between Dev and Sunita be far behind? Dev is all worked up and Sunita just thinks they'll mess it up again. But really, it wasn't all messed up until she found out he kept the fact of his other children from her.

And there's Becky and Steve's upset. Becky doesn't want kids because she's had a horrible childhood and doesn't want to feel tied down. She's also scared of pregnancy as well. There was a scene with her taking a test on New Year's we found out at the end of the month it's positive. She's been smoking and drinking all month. For as much as she didn't want a baby though, she didn't go get a terminatin behind Steve's back. He'd have never known. So somewhere, she did want a baby and probably not just because she knew he did, too. Probably the fear is stronger and so she pushed Steve away. And because she says she won't have kids just when Steve thinks he might like to have more, Steve goes off the deep end in a major sulk. That makes her dig her heels in and one's almost as bad as the other though i think he's pushing harder than she is. He keeps upping the stakes, with expensive gold clubs and a motorbike (don't you need a bike license for those?) and pushing Kelly in Becky's face.

But Becky's mom died and though there wasn't much of a relationship, it still gets you right in the heart when you lose a parent. I think what really bothered Becky is how little her mother had to her name and how she ended up, and it seems to make her think how she could very well have ended up the same way if she hadn't fought to get a life. It hurts that Steve just doesn't take any notice that something is wrong. He really thought that winding her up would make her come running back instead of pushing her away. Finding out about her mother's death was nearly the death of the marraige but you knew that wasn't going to happen, didn't you?
Posted by Tvor at 13:40

I really want Steve and Becky to be the new Jack and Vera - always quarreling but always together!

I just hope they don't burn out like Steve and Karen did.