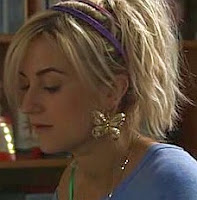 Having decided that Michelle Connor as a character has been ruined by over exposure and naff storylines, next up under the examining light is the character of Becky Granger McDonald. Becky is a very different person when compared to Michelle. We never really knew a whole lot about Michelle's past other than her relationship with Dean who died in a car crash. He was apparently the love of her life and the father of Ryan... er... Alex (enough about that, you get the picture!) We know she was a sometime band singer and barmaid. We know she's got an Irish heritage though it seems like she and her brothers may have been brought up in Manchester, judging from their accents, but we really don't know a lot about how her personality came to be formed and in any case, Michelle does not come across as a wholly complex character. 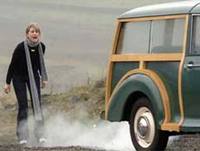 Becky is another matter. Becky is very rough. She's a loose cannon, and she's got a criminal record. She first arrived as an ex-cellmate of Kelly Crabtree, someone that Kelly didn't want to know because it reminded her of her own less than stellar background. Kelly had managed to turn her life around but Becky was still the same person and proved it by setting up Kelly to take the fall for her own petty thievery and she went after Lloyd just for good measure. She was untrustworthy and she was a liability, both to other people and to herself.

She left our screens for awhile but resurfaced in a class that Hayley was teaching to help women find their feet after being in prison. Hayley took pity on Becky and brought her home, much to Roy's dismay. Hayley always sees the best in people and just knew there was hope for Becky and she was determined to help Becky find a better life. Becky was touched that Hayley would have any sort of belief in her as nobody ever did before. Slowly, in spite of Becky nearly ruining things by allowing her old boyfriend, Slug, to steal Hayley's car and by setting fire to the cafe while trying to cook a meal to make up for it all, Roy and Hayley both eventually became firm supporters.

Little by little we would hear stories of Becky's childhood and past life on the street. It sounded very much like she had little family support as a kid and fended for herself for most of her life. She fled the family home, had numerous run ins with the police including the corrupt Hooch who tried to take advantage of a teenage Becky. She fought back and it cost him career points. That brought about a lifelong grudge which was almost successful when Hooch bribed Slug to set up Becky on a drugs charge on her (second) wedding day to Steve last year.

With the love and support of the Croppers, Becky started to bloom. She began to have a bit of self confidence. She had people to consider besides herself and her own survival. She wore makeup, she dressed "better" (a debatable point, but better than the old and tattered gear she wore when she was first in the show). Still, she's fiercely independent and often combatative when defending either herself or someone she's come to love. She's still likely to go off the rails without warning, usually when she's been hurt or had a massive blow to her self confidence. Steve's love has brought her both joy and heartache already because he's not a strong person and has let her down a few times. She still doesn't really believe she's a worthy person a lot of the time and her past obviously still haunts her. Why? We don't know, yet. And these are the things we find intriguing about Becky.

We've seen her character develop. We've seen her in love, in lust, in a drunken rampage, and scared. She's not as tough and prickly as she used to be now that she's been living a more civilized lifestyle but she isn't afraid of most people and she's fiercely loyal. The character has had a lot of important storylines over the last year or two and some might say she's in danger of over-exposure, just as Michelle has been. It may be true but it also seems like the storylines that Becky's character gets are very much in character and fill in more gaps in her past that show us how her character was defined and how her character evolves. Michelle's character was never given that. It's difficult not to have a tendency to "over" use the character, especially now that she's a part of a very central family on the Street, the McDonald's. She works in the pub, she's married to Steve and her pseudo-parents are the Croppers. 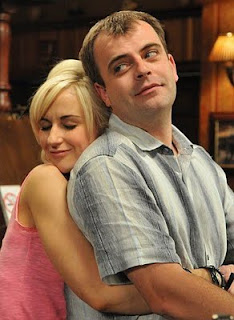 What you see in Becky is what you get. There are no games, no coyness, no pretense of being anything or anyone that she isn't. She doesn't usually whine and if she does, she shakes herself out of it. She can drink you and all your mates under the table and yet she can be tender and generous to a fault. She isn't patronizing and has little patience for fools and she can spot them from a mile, most of the time. She's not a liar nor a cheat unless she has to save her own skin or that of someone else. She even has her own set of moral values, though some of them may be slightly skewed. She's still trashy and common as muck. She's got very few social skills and would tell you so herself but she is starting to believe that she's a good person, some of the time at least. Yet there's always that shadow that crosses her face when she's hurt, as if she always half-expects to be thrown out with the bins at any time and any and all hurts are probably deserved.

A lot of people find the character over the top and yes, sometimes she is. Still, it's part of Becky's personality and always has been so it's not out of character. Becky is a survivor and though she's softened a bit, she's still strong and can defend herself and her beliefs when she needs to. There's a danger that she will be over used and over exposed but I think most viewers who have liked her so far won't be turned off unless the Powers That Be start to give her ludicrous and ill considered storylines just for the sake of having her on screen. The actress, Katherine Kelly, is also careful not to plaster her face and her business all over the tabloids and that helps avoid some of the over exposure. You occasionally see her in glam photo shoots but mostly she keeps her private life private. Kym Marsh seems to be exactly the opposite and that has contributed to people getting tired of seeing her face and Michelle's all over their screen. Katherine Kelly also has a huge amount of chemistry with her main co-stars, David Neilson, Julie Hesmondhalgh and Simon Gregson and that makes a difference too.

Becky has been on our screens a lot, and will continue to be at least for the near future. Let's hope the writers can continue to handle her storylines intelligently and evolve her character without losing Becky's edge.
Posted by Tvor at 13:47

In order for me to keep liking Becky the writers need to "dial her down a bit". She is becoming "way too over the top" the drunken behaviour at her wedding almost turned me completely off her character. I think Kathryn is a very good actress I've seen her in another show. She can be very pretty as well.