We first met Maria Sutherland in 2000 when she was working at her family's kennels. Tyrone Dobbs went there to find a breeding stud for his greyhound, Monica and the two shy young people instantly liked each other. They were sweet together, holding hands and making doe-eyes and eventually cemented their love with a physical relationship which led to an engagement. Tyrone asked Maria to marry him while they visited the top of the Blackpool Tower. Jack and Vera approved and thought Maria was perfect for Ty. It wasn't a smooth ride, however. Tyrone's jealousy caused a few ructions when Maria made friends with both hunky Sam Kingston, a mechanic at the garage and Jason Grimshaw but she was faithful to Tyrone and proved he had nothing to fear. This changed, however, when Fiz Brown arrived and set her cap at Tyrone.

Tyrone's previous jealousy had made him more susceptible to Fiz's forceful pursuit and eventually Maria and Tyrone broke up. By this time, Maria was working in the salon, forging a new career for herself. She may have been meek but it didn't stop her from giving Fiz a hard time under the salon styling scissors. She also worked behind the bar at the Rovers.

She didn't lack for fellas, though. She went out with Jason for a while and moved into the salon flat with Toyah Battersby. She met Nick Tilsley at Richard and Gail's wedding and was instantly attracted. The feeling was mutual. Maria's always been impulsive and not always very smart about men but it seemed like Nick was "The One" so she decided to quit her job and move to Canada with him. She soon got bored and again, impulsively, left Nick and came back home without even telling him. She got her job back at the bar and decided to change her image and her life.

No more the shy, sweet girl, she started to dress as trendily as she could afford, and as skimpy as she dared. She wore short skirts and dated fast men. She moved back into the salon flat. Fiz had moved in while she was gone but the three girls managed to live together without too much contention. That is... until Maria fell under the spell of Toyah's two-timing boyfriend. John was a university instructor and enjoyed seeing how many lovely young college-age students he could seduce. The only problem was, Maria got pregnant.

Unbeknownst to Toyah, it was, of course, John's baby. Toyah was a good friend and supported Maria through a termination but when she found out who the father of the baby was, she was so horrified that she left town.


Maria continued to party and her lacklustre time-keeping and personality clash with Shelley's mother, Bev, ended up getting her the sack from the bar. Audrey took her back on at the salon and she's been working there ever since. 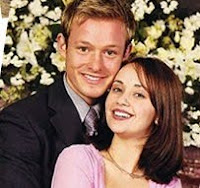 Nick returned to town and after they worked out their differences, they got back together. They even got engaged but Nick's ex-wife returned to Weatherfield and when she met Maria, sparks flew. Leanne was intent on causing trouble as revenge for how Maria had treated her sister, Toyah and succeeded in breaking them up. Maria had been living in the flat over Streetcars with Nick and stayed on there, but Steve moved Liz in as her roommate. They rubbed along all right but eventually Maria moved back to the salon flat.

She and Tyrone went around a second time. But Maria, not being very clever, seemed to think Tyrone was not quite trendy enough and set about trying to change him, subjecting him to body waxes, new clothes and facial care. They were going to get married but Maria had another pregnancy scare. She admitted she didn't want a baby yet though Ty was over the moon at the idea. Tyrone eventually realized that he and Maria weren't really suited and finished with her.

Maria still hadn't got the message. She lurched from man to man and had a very ill-advised affair with Tracy Barlow's boyfriend, Charlie Stubbs. But this time, at least, when she realized that he had no intentions of being with her openly, she broke up with him and told Tracy about the affair. She moved back in the salon flat with Fiz once again, bemoaning her lack of sense when it came to men - which didn't last long as she then had a brief fling with Peter Barlow when he returned for Tracy's murder trial.

It wasn't long after that when she caught the eye of Liam Connor. He was also interested in his sister-in-law, Carla, who was recently widowed when Liam's brother Paul was killed in a car crash. Again, Maria showed about as much sense as a soap dish when she decided to present Liam with a puppy, quite a committment for a boyfriend she had only been seeing a few weeks. Then, once again, she got pregnant. They discussed what would happen and Maria had pretty much decided on having another termination but Liam suddenly proposed to Maria and it seems to the viewer that it was on the rebound, to show Carla that he didn't have feelings for her.

Maria soon realized that there was something between Carla and Liam but Liam denied it and stayed faithful to her. But her insecurities ran rampant when, after a hiking accident, Liam murmured Carla's name. Maria managed to move the wedding date up and though Carla tried to interfere and nearly succeeded, married Liam. Tragedy struck when the baby was born too early and didn't survive. In her shock and grief, and worry that she'd lose Liam, she didn't tell him for a couple of days and he found out from someone else. Her bad judgement nearly ended her marriage but they managed to pull together and recover their old feelings. At least, she thought so.

Maria and Liam tried for another baby and Liam sold his share of the factory to Carla's new man, Tony Gordon so that he could cut ties with Carla for Maria's sake. Unfortunately, Liam still had feelings for Carla though he did love Maria. During the few days after the baby's death and Maria returning to him, he had a short fling with Carla. Rosie Webster caught the pair snogging in the morning and before long, Tony found out the truth and exacted his revenge. He arranged for Liam to be killed in a hit and run accident. Maria had just become pregnant again and is going to have to face a future as a single mother whose husband hadn't had a chance to find out about the baby and who was about to leave her but was callously murdered by his lover's fiance. Pretty bleak as it stands now, but it's a soap. 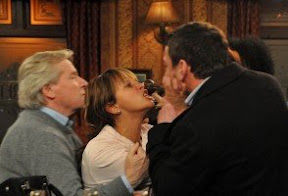 Having said that, it seemed very weird seeing her first vehemently accuse Tony of the murder (she was right!) and then become dependent and the fall in love with Tony, her husband's murderer but grief and hormones can do funny things. Knowing what we know, we viewers gasped in horror when Tony proposed to Mary on the anniversary of Liam's death *at the cemetery, no less*!!! It's all going to go pear shaped, though, because Carla's back and Tony's getting desperate. She knows the truth and with Samia Smith soon on maternity leave herself, the truth is going to come out sooner than later and Maria is going to flee for the boggy moors of Ireland or to sunny Cypress in short order and Tony will be summarily dumped. Back to being a single mum for our Maria when her world comes crashing down. I'm hoping this will probably be the making of Maria, giving her the strength and maturity she was somewhat lacking before. But knowing Maria and her tendency to lean on men rather than be independent, I doubt that's what's going to happen. After all, one of her earlier loves, Nick Tilsley, will soon be back on the scene!