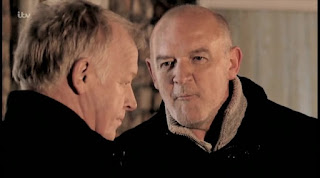 Pat Phelan has succeeded in ousting Michael from Eileen's bed and inserting himself. He's buddy-buddy with Jason and acting like Everyman, all the while hissing at people like Michael and Anna when nobody can hear. Nobody that dislikes him can out and out prove anything and really, what did Phelan do exactly? Make Michael look like a weak and jealous mug, while presenting himself to Eileen as a real "man's man".

Some of you may ask why he's bothering to stick around in a small back street when he was used to the high flying lifestyle he used to have? Well, it's exactly that. He doesn't have it anymore. He hit bottom. No wife, no job, no money. I think he sees Jason's little business as a foot back in the door, that first baby step to rebuilding his empire. He's sucking up to Jason and to his mother. After all, he needs a place to live since he's likely crashing in a grotty bedsit or on someone's sofa. The mighty may have fallen but the mighty will rise again and he takes the opportunity where he sees it and if he doesn't see the opportunity, he makes it by secret sabotage.

Meanwhile, Anna is still cringing around him and shooting him looks to kill, desperate to get him out of her life while unwilling to tell the truth. In the end, though, Phelan got one step ahead of her and lied that they had a one night stand, an affair. There's just enough truth in that to be believable and it was enough that Kevin still doesn't quite trust Anna so she had to tell him the real truth. All of it. And guess what? He believed her. After all that angst. Sheesh.

What annoys me is that she managed to tell Eileen the truth to "save" her but she wasn't willing to tell Kevin given more than plenty of chances prior to now. Will anyone else believe it, though? Doesn't seem like it, which is odd in a way. But folk on the Street have often been quite willing to turn their backs on someone they've known in preference to someone that's been around 5 minutes.

Billy and Eva were trying to save a poor little Polish girl who got caught up with the wrong people. Marta was brought from Poland to work for the O'Driscoll's, Mrs. O'D being Polish herself.  But they've had her working for no money and they've confiscated her passport. Not the happy new life she thought she'd get and they've threatened her family if she tells the police. Eva found her and helped her but she's now back in the clutches of Boris and Natasha who covered their tracks as best they could but Eva is positive she saw Marta in a window.

She did, of course, The storyline couldn't be over as quickly as that. I love that they brought Billy into this. I really like him and it's good to see him in a proper storyline. He's such a nice counter part to the odious Aidan. For all he tries to be charming, I really don't like him much and I think Eva's a mug for being with him. Never mind that. Aidan's a reluctant participant in the rescue schemes because he's also under pressure due to the O'Driscolls being a huge client and they could nearly single handedly bring down the factory.

At last, though, Eva and Billy and ultimately Aidan managed to rescue Marta with Aidan taking on Richie O'D in a showdown. It's a happy ending for Marta but Underworld has taken a hit. This has been an interesting storyline, something a little different and gave Billy a great chance to be in the forefront. As ever, I also love Eva so it was great to have her featured as well. 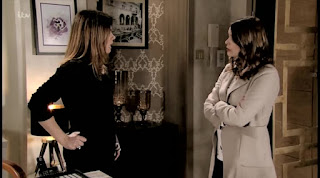 Carla's not much help with the factory these days because she's too distracted by weddings and blackmail to be of any use there these days. And that's another thing. I really detest that Tracy has the upper hand with Carla and the restaurant. She's blackmailed Carla into pushing Nick into selling Robert the Bistro and it actually is happening as far as we know. I'm glad Robert keeps trying to knock Tracy down when she gets heavy handed with the Bistro staff but she won't give up there and she will end up driving all the staff away with the customers not far behind. I don't like Robert that much but he's still too good for Tracy Barlow.

Why is it that the powers that be lose interest in a character and completely ruin them? It's maddening. Carla has changed so much since she first appeared and mostly it's been good as she's developed a bit of a tender side (when nobody's looking) but now she's lost any spark and gumption she ever had. The old Carla wouldn't stand for Tracy's shenanigans and would have gone straight to Robert after confessing to Nick what she'd done. She's left it too long now. Even if she confesses, Nick isn't likely going to forgive her.

Sarah has been under stress even before she found out she was pregnant and it hasn't really eased up much, not with the knowledge of the body under the floor. One day of no movement and Sarah's freaking out but given her history, you can't blame her. They said the baby was ok but it seems to me, babies get a lot quieter just before birth, don't they?  It might be true, because a few days later, Sarah goes into premature labour and has a baby boy! He's not as much of a preemie as baby Billy was and his chances are very good but of course Callum's mom gets wind thanks to Gemma and is lurking about. You can't really blame her. 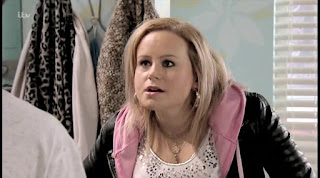 Speaking of Gemma, am I ever happy she's back! She was the one really shining thing in that whole dreary Callum storyline. Yes, I did like the storyline on the whole but the months when Kylie was missing and it was just Callum vs. David, that was beyond tedious except for Gemma and Macca and Gemma was wonderful! I think she'll shake up Chesney's world and I hope she stays for awhile, gets her act together and we see her get out of the dead end she was probably in up to now.

Sally's campaign for council has been comedy gold. Facing off against Norris was good too even if I don't like the little pillock at all and would be quite happy not to have him around. Sally was wonderful and it really showcased how supportive Tim is even if he knows she's a bit of a nag and has unrealistic asperations to grandeur. She won, too! I'm quite happy and I think in spite of the fact that she is very inexperienced in this sort of thing, she'd do a good job. Partly because she wants to impress and partly because she really is well organized. She's not stupid and she could very easily get under the skin of various bureaucrats and could get things done. I await with glee future scenes with snobby Sally throwing her weight around.

Other lesser storylines that may ramp up a bit include Izzy's pain management using marijuana with Gary helping to supply her, Rana and Zeedan's new relationship, which is something I don't buy into because I really don't think she's all that serious about him. She's an incorrigible flirt and he's going to get burned. We've got Michael deciding to leave town though the actor is just taking a break to do a play so he should be back. Dev and Erica are still circling around each other, keeping things on a low burner. Tyrone's still trying to find ways to earn extra money.

I like seeing Billy do more Vicar stuff. Human rights etc. Maybe if we are lucky we will see more of it and flesh out his character a bit.
I hope the Phelan character leaves soon. I REALLY dont like him, find myself fiddling with my knitting or something when his scenes are on.

Good post, but please don't help perpetuate the myth that babies move less when they're ready to be born. My son's movements reduced dramatically one day, and as a result, I had an emergency c-section. Without it, he wouldn't have survived. Babies stop moving for a reason.

What happened with Ken and Audrey's budding romance? After all that angst it seems to have been forgotten. We haven't seen Sinead in a long time either.