What does Sarah have to lose? Plenty 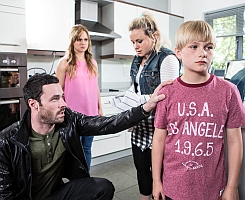 Sarah has now seen the truth about Callum, a truth she probably already knew down deep. Callum accused her of knowing what he was really like and being attracted to the excitement of it. That could be true. We're all pretty sure that she only started going out with him so she could wind up David and we are definitely sure that's why Callum did it initially. As he said, it would also have looked good in court in his bid to win custody of Max.

I still fail to understand how a man with his background could possibly be considered for full time full custody of a child even if he did pretend to have cleaned up his act. Surely the police or Social Services would be investigating both he and David very closely in this matter. If nothing else, David should have got his lawyer to hire a private investigator to prove Callum was still dealing but reality doesn't really have much of an impact on soaps so we'll just leave that there. It is what it is. Kylie can only testify that he was dealing back at Christmas when David kicked her out. She was getting drugs from Callum up until then. Callum can then say he stopped after she left town. Again. unprovable in court.

Now, though, Bethany has seen and heard many things that can prove Callum's activities and has been coerced into it herself. Dropping a package of money off isn't illegal but handling a package in return which had drugs in it most certainly is. Could she say that she didn't know what was in the package? Possibly. A photo of her smoking a spliff is a misdemeanor at worst. So Bethany really doesn't have anything to worry about, I don't think. Sarah though, is frantic. She knows Callum has evidence against Bethany and thinks Bethany could be sent to juvenile detention. Callum's pretty threatening and considering the state of Gemma's face, and the fact that David has been roughed up in the past, Sarah knows his threats are real and dangerous. She's not just scared for Bethany in a legal sense but for all of their physical safety if she goes to the police. 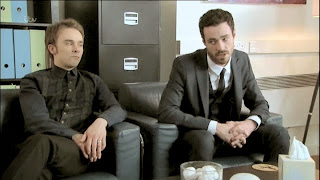 Callum still deals drugs. Callum had a loaded gun in his flat, in a child's bedroom closet, no less. Callum is blackmailing Sarah into keeping quiet. I don't really think he wants Kylie back romantically, that suggestion the other week was more in aid of getting Max than it was getting back the "love of his life". Callum wants full time custody of his child. Does anyone see the problem here? I still don't really understand why he wants Max full time, given the kind of business he's doing.

I don't think he had a shocking childhood which might lead him to the conclusion that bringing up a child in a criminal environment isn't such a bad idea. Callum's mother, a teacher, seemed quite nice and respectable and it follows, somewhat logically, that he probably had a decent bringing up rather than a rough childhood on a dodgy estate, or shuffled in and out of care or something similar to the childhood we know that those like Tyrone, Fiz and Chesney had. Is his mother afraid of him, too, rather than testify that he shouldn't be a full time dad? Or is she just wearing massive blinders, thinking her son isn't a bad boy, just a bit naughty and his recent jail sentence was a miscarriage of justice.

I would suspect, in the long run, that Sarah will do the right thing and go to the police. It may even bring Bethany and Sarah back to a more even relationship.  Callum is going to cross the line at some point soon, before the custody hearing. I maintain my prediction that he will end up dead. Any number of Platts could be suspect but the guilty party will be an expendable crew member as per the Soap Laws, probably Gemma. Callum's a baddie, even if he's not a very convincing one, and will pay for his crimes.
Posted by Tvor at 11:07