First off, you're right. There was no State of the Street for January because my PC packed up just before the end of the month. I had a document saved that had all my thoughts and I can't get to it. No point in reviving it when I get the data copied over to a new machine so we'll just skip January. February's State will be posted, though, at the end of the month.

Now that's out of the way.

What I really wanted to write about was the current storyline with the Wind-Strongs and the return of the native, Linda Armstrong as was. 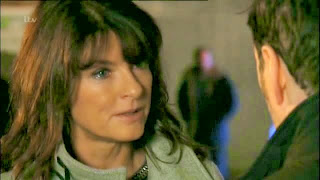 A bit of back story: From what we've been told to date, Owen's ex and the mother of his two children abandoned the family when Katy was a baby, a toddler perhaps. She has no memory of her mother at all. Izzy, a few years older, remembers her mother. She had just been diagnosed with the syndrome that has disabled her and mainly keeps her in a wheelchair. She, as most children do, thought her mother left because of something she did or because of her illness. Her father, greatly hurt at his wife's departure, allowed her to think that and stepped up to the plate to be as good a dad for his girls as he could. He might be a bit strict, a bit over protective of Izzy and a lot rough around the edges, but his daughters knew he loved them very much.

Still, Izzy grew up feeling guilty that she was the reason her mother left. She's got confidence and a lot of bravado but some of that is to cover that insecurity and guilt. 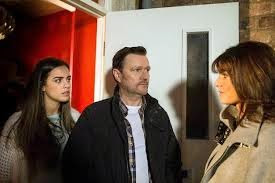 Now, out of the blue, Owen's ex, Linda has appeared. She has decided she wants to get to know her daughters. That's an uphill battle with Owen doing everything he can to undermine her with Katy and Izzy. Katy, though, doesn't have that guilt and was too young to remember her mother leaving. Katy wants to get to know her mother. Izzy is horrified and has too much resentment and guilt to want anything to do with her mum.

But now the truth comes out. Right from the start of her visit, we the viewers could see that there's more to this story than meets the eye and recently, Linda told her girls the truth. She took Izzy's diagnosis badly, had an affair with her boss and left. She soon regretted her actions and wanted to come back but Owen wouldn't let her. He wouldn't even let her see the girls and returned every card, gift and letter she ever sent. He was determined, mainly due to his own heartbreak, that they would either forget her or see her as the villain of the piece. Katy and Izzy believed their mother's story, mainly, I think, because she said she had the proof of the returned letters and cards. Katy has the added experience of something similar, having a fling with Ryan Connor when she was with Chesney but it didn't mean she couldn't be a good mother and Chesney agreed to that concept. 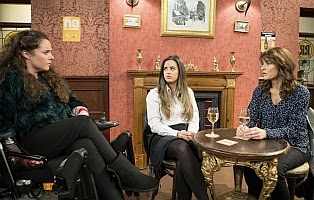 Owen is now the villain of the piece and Izzy's reaction in particular is heart-rending. She accused him of letting her feel bad about herself so that he could be the hero. That's how she sees it and even if he wasn't thinking that specifically, that is in effect what he did. And the truth hurt. Good! I hollered at the telly. You deserve what you get. It's a big betrayal, isn't it? It is going to be difficult for the girls to forgive this one in a hurry. Maybe they never will or if they do, it will be a long time coming.

The storyline, as a whole, is good soap fodder. But I do have one thing that dissatisfies me. Suspending disbelief, I can accept that even though Owen has lived in two different homes since he left the family home where Linda would have lived, Linda was able to find them with no problem. Presumably she either asked at a nearby business and we didn't see it on screen or there is information online available that she could find or even more likely, there are still relatives in the area she could contact. The thing that makes it a bit more difficult to buy into the storyline is that I don't think I like the actress that plays Linda, or at least, don't like the way she's playing it.

I have no previous experience of the actress and don't know if this is her usual acting style. It seems to me she's a bit too bland and low key. She's not really getting shouty and angry like I thought she would, fighting back against Owen's bullying. She's not cowering but she's not putting a lot of obvious anger in her reactions either. It doesn't even come across as an under-the-lid simmering, like someone really trying to hold it in, avoiding losing their temper else be reduced to his level. It just doesn't feel like anything at all. She ought to have eyes a-snapping and teeth gritting, telling him in no uncertain terms where to go and where to shove his attitude. She doesn't have to scream and shout, but I would think most women in that position would be a bit more passionate in their response, too. It doesn't feel realistic in my view. 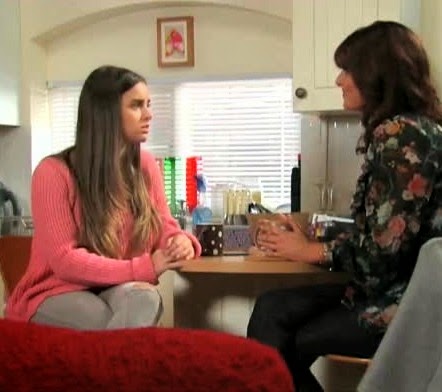 The other issue I have with this is another reality point. I read a comment on the Coronation Street Blog and fully agree. Why didn't Linda ever try to gain access via a solicitor? There was no reason for Owen to withdraw access to the children. Was she an abused spouse? Was she afraid of him? Did it take her this long to return because he had browbeaten the confidence out of her? It can take some people a long time to work their way through it and get the confidence and strength to face their past fears. We haven't been told that was the case but seeing Owen's temper and sometimes violent outbursts, could that be the case? It would at least make more sense as to why she finally fled and didn't take legal action.

I do think the reactions of Katy and Izzy are spot on. Katy has been cautiously giving her mother a chance, a small foot in the door but ready to shut it if her mother didn't manage to say the right things. Izzy has been resentful and defensive, with grief and guilt mixed together, trying desperately to keep her walls up and armed. Now, finding out what Owen did, Izzy is crushed. Katy is furious because she can identify with her mother to an extent and she's protective of Izzy, too. Anna is just shocked and I do agree, that Owen's showing signs of never having got over his hurt, it's resurgence a worrying sign that he could still be teetering on that love/hate borderline.

Without spoiling it, I do know the end result of all this but it will be interesting to see the rest of it play out, including watching the girls finally get to know their mother.
Posted by Tvor at 17:36

No mother worth her salt would give up without a fight! Where the hell has she been for all those years come on. Not buying it for a minute.

I think she was in a show called Mistresses a while back similar persona too.