A new twist on the standard love story 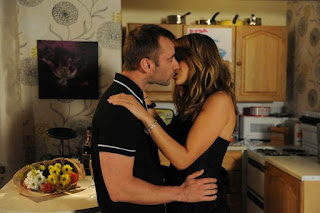 Soaps are all about love stories, affairs, triangles. Star crossed lovers who are destined to be together no matter who they are with in the meantime. People fall in love with a bad'un who hurts them emotionally, or worse. Some people have a long history of losing in love. Sometimes love is found in unexpected places.

We've had all that on Coronation Street and are about to explore a new twist on the "unexpected places" type of love story. We have a pretty hairdresser, a single mother in her late 20s. She's not had much luck with men and seems to choose the wrong one over and over. We have a kind, gentle gay man in his early 30s, recently split from a partner and longing for a family of his own. The two of them have become close, best friends, and are sharing a flat. He gets on really well with her brother who also lives in the flat and her little boy, a mutual admiration thing going on there.

He was her rock when she thought she had breast cancer. He was terrified to lose his friend and was overjoyed when she was given the all clear. They had champagne, she kissed him, and... what? He kissed her back? And he really did kiss her back, properly. They were then, in the tradition of soaps, interrupted by her boyfriend, local builder who has also not had a lot of luck with women over the years.

Thus we have Maria, Marcus and Jason. In comments from blog readers, there has been dismay and even outrage. There is concern that the powers that be are sending the wrong message, that a gay man could be "turned" by the right woman. That this never could happen in real life. They're wrong, at least about that second statement. It could and has happened in real life. People can't always control where they find love. Sometimes it's with the least expected person. Sometimes it's still not Forever After but even so, it does happen. 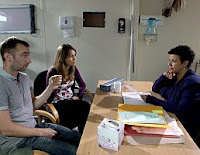 Poor Marcus was stunned, shocked and confused that he reacted the way he did. He had the biggest WTF look on his face I've ever seen! Marcus had never even tried to kiss a girl or woman ever, he protested, where has this come from? They've decided to write it off as a one -off, a reaction to the stress, relief and alcohol. But it isn't going to go away. It's going to be the elephant in the room even while Maria tries to make a go of things with Jason and Marcus tries to keep his relationship going with Aiden.

I don't know where it's going and I don't know how long it will last. I am, however, confident that the producers are not going to send the wrong message out. I believe that Marcus and Maria will not be Love's Young Dream in the end. I do hope their friendship will not disintegrate because of it but that they will agree that it isn't working. Marcus will know down deep that this isn't right for him and it's not who he is. 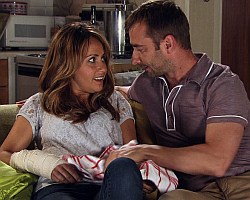 Marcus has always known and been confident in himself as long as we've known him. We also know Marcus would dearly love to have a family and has fallen in love with Maria's little family as much as anything. She offers him a son, and he loves her as his best friend. I really think this whole situation is going to be handled sensitively and realistically, as much as television ever can be. This doesn't feel to me to be played for sensation. Charlie Condou who plays Marcus has supported the storyline and I think that he would object strenuously if it was not played honestly.

Marcus and Maria truly seem to be an Odd Couple at the moment but that's not new for Corrie. Roy and Hayley were truly one of life's Odd Couples and they fit together like a scissors, working perfectly together and are one of the show's most and probably only stable couple.  Anyone with Kirk makes an Odd Couple but, oddly, it usually works. Could there have been an odder couple at first glance than Alf and Audrey?

I think that the early objecters and worriers should sit back and see where it goes and how it's handled first. We've only just cracked the seal on the storyline, it's far too soon to decide it's been a really bad idea. I don't always have faith in the producers because they certainly have come up with clunkers in the past, but I'm willing to wait and see on this one and am optimistic that it will be an interesting take on love stories. Marcus and Maria will probably not be the next Roy and Hayley, but I will find their journey interesting.
Posted by Tvor at 08:26

I'm currently doing a huge campaign with the new sponsor of Coronation Street and would love to be able to chat to you about all the exciting stuff we'll be doing soon.

If you're interested in knowing more please drop me an email at charlie.elliott[at]newcastuk.com