Thoughts on Becky and Nick 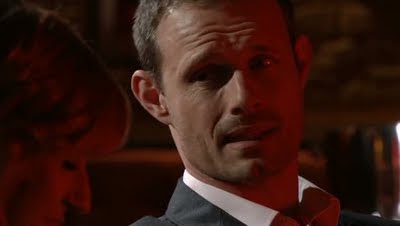 I'm still a Becky fan no matter that a lot of people are getting sick of her. This week was a great Becky week for me. I really thought the whole scenario and storyline of her working at the Bistro, having a fling with Nick and winding up Steve and Kylie and David was great! It didn't last an eternity or get dragged out farther than it should have been. It was just right.

The Bistro seemed like an odd fit and as we know and as Becky finally admitted, she's not a cocktails and tapas kind of girl. She also had to face demons in the personae of Kylie, David and Steve through the week, all of which tested her and found her failing her patience exam. Kylie and David in particular made a point of rubbing Becky's face in it letting her know that they were going to get Max back. There are so many great restaurants in the Greater Manchester area they could have gone to to celebrate but no.... they went to the Bistro. Of course that's because there has to be more conflict in the storyline. It would have been pretty dull had they just gone out to the Chinese at the precinct or something.

I felt bad for Becky. Yes, she's somewhat the author of her own misfortune. Steve might have called Social Services on her but she was out of control.

Then there was Nick. They almost made a good couple. Odd but oddly not so bad but her volatility would soon have him running for the hills had they managed to stick together. He's right, with all her baggage along with her rocky relationship with his sister-in-law, and the fact that she's on a massive rebound, it just isn't working. I have to say, though, I thoroughly enjoyed Gail's and then Kylie's reactions seeing Becky there in the morning. Gail was horrified! I'm glad she brought up his tryst with Tracy. So often they forget these things happened. And Nick might accuse David of being the family weasel but he's just as capable of using people to wind up others as well. He certainly enjoyed his mother's discomfort every bit as much. Odd to see Gai defend Kylie after all this time, though. 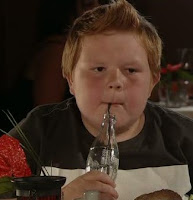 There were some nice scenes on the last of the episodes with the two of them talking. I can't stand Nick, he's just as weaselly as David and he can manipulate and lie with the best of them. He's arrogant much of the time, too, but this week he was almost sympathetic. I think Nick could be a good friend to Becky. She needs friends besides Roy and Hayley.

And of course Steve's date from hell was hysterical. You know without asking that this gorgeous woman was going to turn out to be the lowest form of tacky they could dredge up. Brilliant stuff! And that moon-faced ginger kid! First of all, he really looked like he could have been her son. Second of all, Steve said he dated her once 10 years ago, that kid had to have been 10 or 12. But aside from that, what a perfect casting choice and he was scarily and hysterically perfect, staring at Steve, slurping his drink and not saying a word. He had me creeped out and laughing all at the same time, watching him!
Posted by Tvor at 12:27

I agree with all of this as I was watching too!

I'm glad someone agrees, there aren't a lot of Becky fans out there these days!

I still like Becky. I'm sorry Kat Kelly is leaving, she's a great actress....... but I do think the character has been over exposed, alienating a lot of viewers.

I do agree, Jane, that they overused Becky. They've had a habit of doing that over the past few years. A couple of years ago it was All Michelle All the time. Before that it was Sean Sean Sean.

Saxophone Instrumental.. it was playing in the Bistro when Steve first entered the establishment and was sitting at a table. what was this piece of music called ? This was on August 5th.

It's so annoying - I present a Radio show on Hospital Radio and I have been trying to find this particular piece of music for a while now. I just watched the Aug 5th show airings on STV but that music is no longer there ! maybe I am going mad. this is a well known Sax instrumental and I will be sure to Kick myself when I find what I am looking for. Thanks for the quick response by the way Tvor.