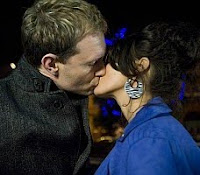 It's the holiday season and tis the season on Coronation Street for either a birth or a wedding. We'll have Gail and Joe's wedding shortly after Christmas and tis also the season for the traditional disaster at Platt Towers and this Christmas, the potential certainly was there but it was all behind the scenes. David is still chasing Tina in spite of having a lovely girl, Zoe and the prodigal son, Nick is back. David ended up chasing Tina right into Nick's arms inadvertently. Now it's going to get tricky. Tina is with ex-Platt-son-in-law Jason and she used to live with David who is still obsessed with her as the "one that got away". It was bad enough that she ended up with Jason but if she and Jay split and she goes out with Nick? I don't think anyone in Weatherfield is safe. It'll make Gail's tumble down the stairs look like a run down the bunny hill at a children's ski resort.

The war of the Grandads heated up. Ken feels inferior and George keeps sticking his size 10s into Peter's business. Ken's sanctimonious posturing only made Peter run the other way, straight into George's pocketbook. It was inevitable. Why start the bar storyline in the first place if you weren't going to find a way to make it happen? It may or may not be a good idea for Peter to open a bar but it always upsets me that Ken never ever has a supportive word for Peter. Well, hardly ever. It just gives him a crusade and he's never happier when he's got one of them. No wonder Peter thinks he isn't good enough! And it's just as much about George's money in Ken's eyes as it is about Peter's potential risk with booze. And what difference does it make whether the neighbourhood has one bar, which it has had for 100 years nearly, or two?

I'll tell you what though, I'm not quite sure i trust George. I'm sure he took Simon to see "Santa" on purpose because he knew it was really Ken. It was a good way to get his own back and as he had probably hoped, Ken played right into his hands. He's taken every opportunity to undermine Ken and get one over on him, make himself look the better man in Peter's eyes and take advantage of the acrimony between father and son.

The Great Golf Game introduced Dev to a lovely new woman just as his ex and mother of his children, Sunita, came back onto the canvas. Bernie knew when she was up against the insurmountable. I want to know if Dev has been seeing his kids regularly, and there's no reason to think he hasn't, and if Matt is his friend, why he didn't know about Sunita's boyfriend *before* he became her fiance? What's up with that? Even if neither Matt or Sunita said anything to him, kids talk! I hate it when they write these things and don't pay attention to a detail like that. It's thrown Dev for six though.

Now. Gail is trying to sell the house to pay off Joe's debts. Other than Audrey noticing the sign, how long did it take for anyone else to mention it? Gail's best friend Sally lives two doors down and walks by the sign every day on the way to work but hasn't popped over to get the goss! Totally unrealistic. Audrey isn't too happy about Gail's choice and I can't really blame her. He might be an ordinary bloke, by his own words, and he loves Gail, but as a mother, Audrey sees that he has caused her daughter a lot of heartache and trouble and Joe has let Gail down time and again already. As viewers, we see he's still in deep and sinking (quite literally, by all accounts!).

The best thing about Rosie's short lived attempt at blackmailing Stape? Janice's reaction, giving her hell because lying about stuff like that makes it harder on the next woman who really does get assaulted and raped. Like Toyah. Ken Barlow is the most unlikely Santa i've ever seen. He even beats out Percy Sugden though he did sit high on his horse the same way, scolding kids for wanting so much and forgetting the real meaning of the season. 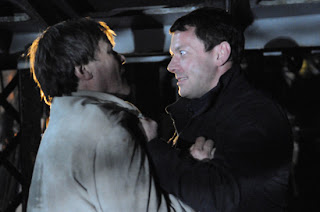 The shadow of Tony Gordon continued the first half of the month. Carla found out she didn't kill Jimmy after all, which, while I'm sure is a relief, also meant she got dropped in it well and good. Carla had to confess that she knew Tony killed Liam and said nothing but as usual, Michelle makes it all about her. Michelle's reaction really seemed a bit over the top and I started wondering if it all wasn't written to put that kissing incident with Ben in there. That aside, I can understand that finding out that Tony really did kill Liam and Carla knew etc. would upset Michelle but she seemed nearly in hysterics, for Maria's and Roy's sake. Eh? Maybe she should just be happy that Tony and Jimmy have been arrested. Meanwhile, we thought Carla had a big job trying to work on her destroyed reputation, which wasn't great to start with. Typically, she did manage to talk Roy and Hayley around to her side in about 5 minutes, and where Roy and Hayley support, the rest were sure to follow. Grudgingly. Don't want to lose their jobs, after all!

Kevin and Molly got bolder, sneaking sub-Sally's-duvet moments instead of going to the motel. It's came to ultimatum time. Affairs almost always do. Molly was getting itchy feet and stroppier with Tyrone by the minute. Problem with that is once they tell, the secrecy and thrill will be gone. But Kevin started to realize what he really had to lose, and started to back off. Molly played the oldest trick in the book. Told him to get stuffed so of course he came crawling back but just when they're going to go public, Sally gives Kevin devastating news that she's got to face breast cancer. I wonder if he's secretly relieved that he isn't forced to leave his marraige just yet even though he was on the verge of it? It also gave him the shock of his life and his priorities became crystal clear yet Molly wouldn't let it go, still hoping they can be together eventually.

It was hard listening to Sally tell Kevin, how she kept it to herself until she knew for sure and even then, she wanted to wait until after Christmas. When I say I'm looking forward to this storyline, I mean that I know Sally Whittaker will do an excellent job of it and Corrie writers are always so good at things like this that it will be well written and acted. I'm not even going to gripe about things like how soon test results get done or things like that. It's telly and they have to speed things up on the whole. 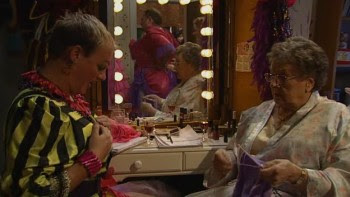 Claire and Becky? Mates? Stranger things have happened I suppose but it seemed unlikely yet even after the Panto, they seemed to stay on friendly terms. The first Street Panto in over 25 years and wasn't it all fun? I wish we'd seen more of the auditions and the show, though. Best part was Betty being the Fairy Godmother! It was put together in less than two weeks (Hayley must have sewn costumes until her fingers bled!) and the whole thing was non stop bickering and casting changes but they managed to get it on stage and it was good fun. Amy only managed one word instead of a song. "Bollocks" One word's nothing new, though, she never does speak more than that at a time. (They really need to get a new kid in that part!) Problem was, it wasn't the sort of word a child should be uttering. Fail!

We can't let this month's State of the Street pass without one last salute to Maggie Jones and Blanche Hunt. Maggie's death has echoed around the world in Corrie watching countries. In Canada, we have another 10 months to enjoy Blanche and it will be a bittersweet experience, knowing it will be coming to an end. Maggie will be missed and there will never be another Blanche Hunt.
Posted by Tvor at 18:10